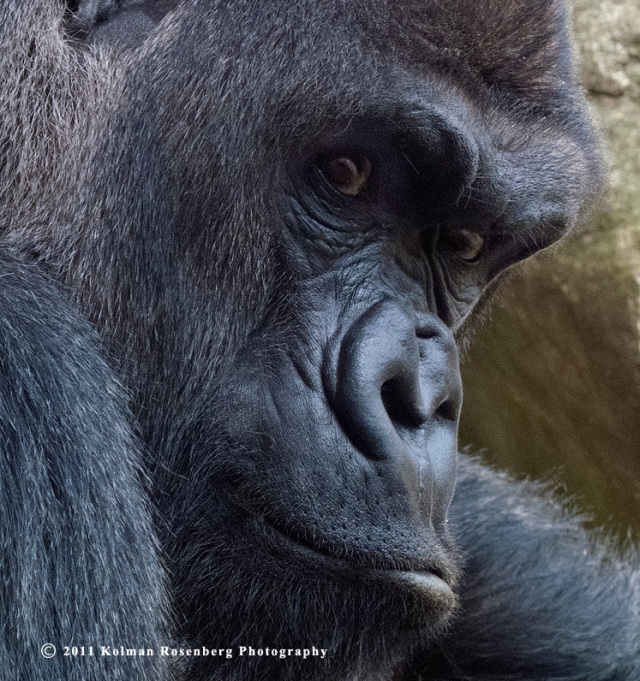 As the title of my blog suggests, I prefer to shoot unposed subjects.  In fact, I usually advise photographers to take their portrait and people photographs candidly.  I find that you will get more honest, natural expressions that way.  A few days ago, I and thousands of other Cleveland area residents went to the Cleveland Metroparks Zoo to see the new Elephant Crossing exhibit.  While there I came upon a sleeping gorilla in a very unflattering position.  After observing him for a few minutes he sat up and occasionally looked in my direction as if to say, “Hey, you looking at me?”  I took several shots, but this is the obviously unposed expression that I liked.  In order to really give your portraits added impact, get close, zoom in, concentrate on the eyes and capture those candid expressions!

My interest in photography began as a college newspaper and yearbook photographer during the stormy 1960s and 1970s. I was influenced by many of the great photojournalists and documentary photographers such as W. Eugene Smith, Walker Evans, Dorothea Lange, Gordon Parks, Margaret Bourke-White and other black and white photographers of Life Magazine and the earlier Farm Security Administration. Though many of these photographers documented the horrors of war and the plight of poverty, they also showed me the dignity and adaptability of human beings in their desire to prevail.
View all posts by Kolman Rosenberg →
This entry was posted in Uncategorized and tagged candid, Cleveland, gorilla, Metroparks, portrait, primate, zoo. Bookmark the permalink.