Leading Up to Memorial Day: Part I 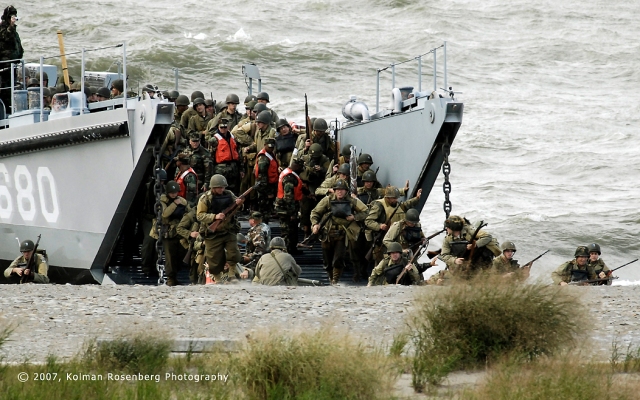 Landing on the Beach at Conneaut D-Day Reenactment

With Memorial Day approaching, only a week away, I thought I would post a series of photos in order to remind us of the true meaning of Memorial Day, to honor Americans who have died in all wars.

Several years ago, I attended the annual D-Day Reenactment in Conneaut, OH.  The event, staged in a setting which was chosen due to it’s similarity to France’s Normandy coast, served as an extremely realistic depiction of the D-Day invasion of June 6, 1944.  This photo shows the beginning stages of the reenactment as reenactors leave the landing craft as the battle begins.  As this week progresses, I will post other photos following the reenactment and demonstrating the courage, dedication, and sacrifice of our servicemen and women who have defended our nation.

A series of  photos were put together to publish a book fully documenting this reenactment.  The book can be seen and purchased at:

My interest in photography began as a college newspaper and yearbook photographer during the stormy 1960s and 1970s. I was influenced by many of the great photojournalists and documentary photographers such as W. Eugene Smith, Walker Evans, Dorothea Lange, Gordon Parks, Margaret Bourke-White and other black and white photographers of Life Magazine and the earlier Farm Security Administration. Though many of these photographers documented the horrors of war and the plight of poverty, they also showed me the dignity and adaptability of human beings in their desire to prevail.
View all posts by Kolman Rosenberg →
This entry was posted in Uncategorized and tagged Conneaut, craft, D-Day, dedication, defense, invasion, landing, Memorial Day, military, Normandy, OH, reenactment, reenactors, sacrifice. Bookmark the permalink.