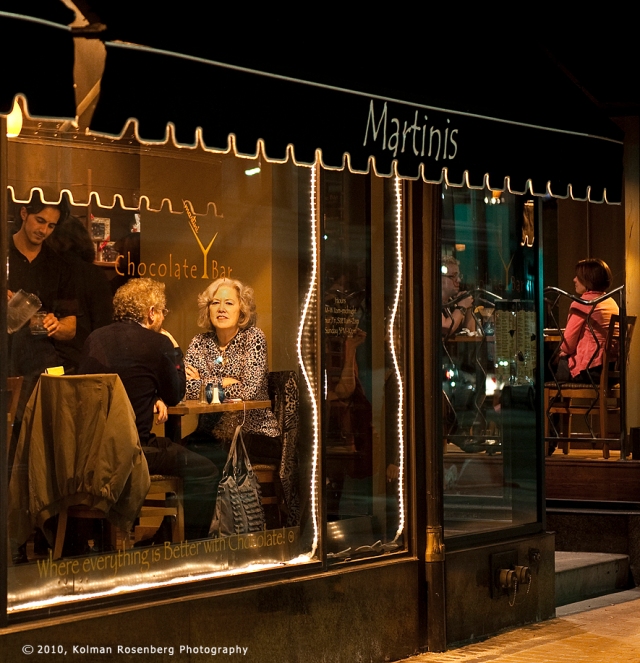 Whether we photographers want to admit it or not, we are all influenced by images we see throughout our lives.  We usually want to be original in our photos but many times we see a scene which brings to mind an image that we have seen before.  This photo, shot in downtown Cleveland on a beautiful summer night in 2010, brought to mind one of my favorite paintings, “Nighthawks” by Edward Hopper. 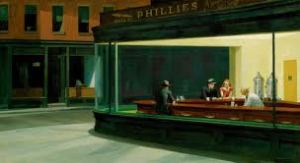 For a number of years now, I’ve been trying to capture photos through windows of restaurants, bars and stores which capture candid scenes of people in the midst of their normal everyday lives.  Hopper’s painting pops into my mind whenever I see and shoot that type of photo.

My interest in photography began as a college newspaper and yearbook photographer during the stormy 1960s and 1970s. I was influenced by many of the great photojournalists and documentary photographers such as W. Eugene Smith, Walker Evans, Dorothea Lange, Gordon Parks, Margaret Bourke-White and other black and white photographers of Life Magazine and the earlier Farm Security Administration. Though many of these photographers documented the horrors of war and the plight of poverty, they also showed me the dignity and adaptability of human beings in their desire to prevail.
View all posts by Kolman Rosenberg →
This entry was posted in Uncategorized and tagged bar, chocolate, Cleveland, Hopper, martini, Nighthawk, scene, street. Bookmark the permalink.