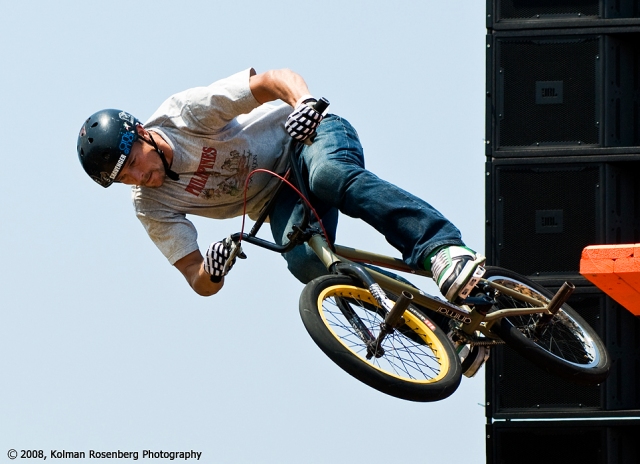 The Dew Tour is an event just made for sports and action photographers.  The stunts done on bikes and skateboards are absolutely amazing, dwarfing some of the efforts I made as a kid riding off of an 8″ ramp on my bike and thinking that was daring!  This event offers photographers some amazing angles on the athletes as they soar, flip, twist and turn.

Taking flight with the runway in the background.

This biker, soaring approximately 40′ above the ground, arms spread, almost appears to be taking off from the Lakefront airport in the background.

Sometimes, if you keep your eyes opened and look for the unusual shot, you can find an image that most people will not see.

A shadow of a biker.

My interest in photography began as a college newspaper and yearbook photographer during the stormy 1960s and 1970s. I was influenced by many of the great photojournalists and documentary photographers such as W. Eugene Smith, Walker Evans, Dorothea Lange, Gordon Parks, Margaret Bourke-White and other black and white photographers of Life Magazine and the earlier Farm Security Administration. Though many of these photographers documented the horrors of war and the plight of poverty, they also showed me the dignity and adaptability of human beings in their desire to prevail.
View all posts by Kolman Rosenberg →
This entry was posted in Uncategorized and tagged bike, dew tour, flight, ramp, shadow, skateboard, soar, tube, x game. Bookmark the permalink.