Reflecting on the Past

Posted on October 6, 2011 by Kolman Rosenberg

Traveling east on U.S. Route 322, near the Pennsylvania border is the small town of Wayne, OH.  Wayne is the home of the Ashtabula County Antique Engine Club.  This club is the home of a preserved early 20th century gas station. 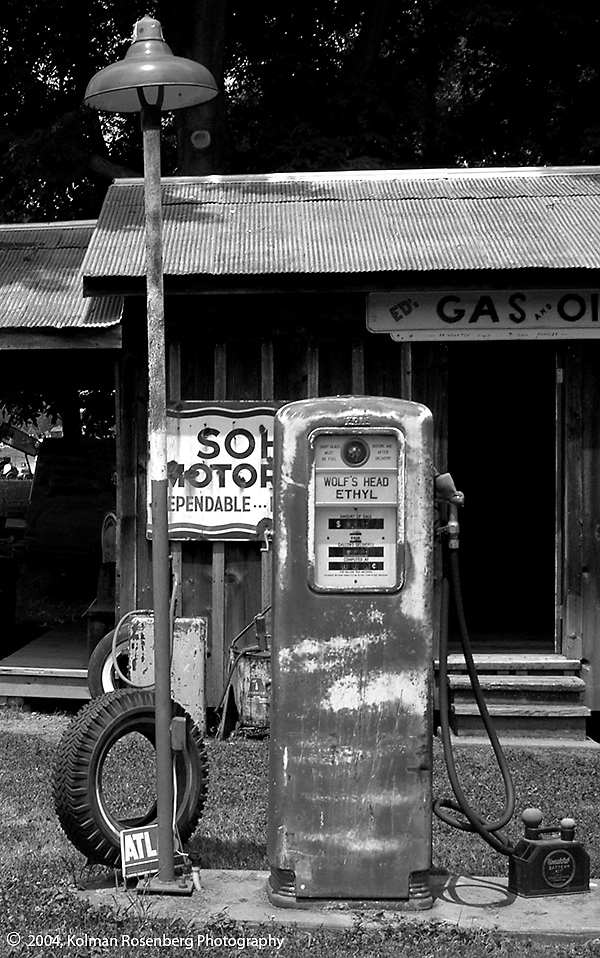 The station has a collection of old gas pumps, tires, oil cans, and during festivals there, antique cars sit in the station as well.  It’s a real look back at the history of automobile travel in our country during the last century.  One of the most astounding things, particularly for the younger crowd is the price on the pump for a gallon of gasoline.

The price on the pump?

17.9 cents per gallon!  Wouldn’t we like to see those days again!  I won’t hold my breath.

I’ve been here several times and enjoy the nostalgia of looking back at the days of my childhood and even further back.  During the yearly shows at this club they also feature steam engines of many types and sizes.

Shortly after shooting the gas station I came across this elderly gentleman, possibly reflecting on his past.

Reflecting on the past.

It’s one of my favorite photos conveying a sense of slower times in our history.

My interest in photography began as a college newspaper and yearbook photographer during the stormy 1960s and 1970s. I was influenced by many of the great photojournalists and documentary photographers such as W. Eugene Smith, Walker Evans, Dorothea Lange, Gordon Parks, Margaret Bourke-White and other black and white photographers of Life Magazine and the earlier Farm Security Administration. Though many of these photographers documented the horrors of war and the plight of poverty, they also showed me the dignity and adaptability of human beings in their desire to prevail.
View all posts by Kolman Rosenberg →
This entry was posted in Uncategorized and tagged 20th Century, antique, Atlas, automobile, Car, Engine, Ethyl, Filling Station, Gas Station, Gasoline, Goodrich, Motor, Nostalgia, OH, ohio, Oil, Petroleum, Refelcting, Reflection, Sohio, Steam, Tire, Tractor, Travel, Wayne, Wolf's Head. Bookmark the permalink.

4 Responses to Reflecting on the Past