A few years ago, in 2009 to be exact, I had the opportunity to tour and photograph the decrepit remains of Chippewa Lake Park.  I had never visited the park during its active operation which lasted 100 years, from 1878 to 1978, but many of my Ohio raised friends had very fond memories of visiting during their childhoods.  After the park shut down in 1978, it was left to decay for over 30 years, so at the time of my visit only the vestiges of good times past still remained.  Mother Nature had taken her toll! 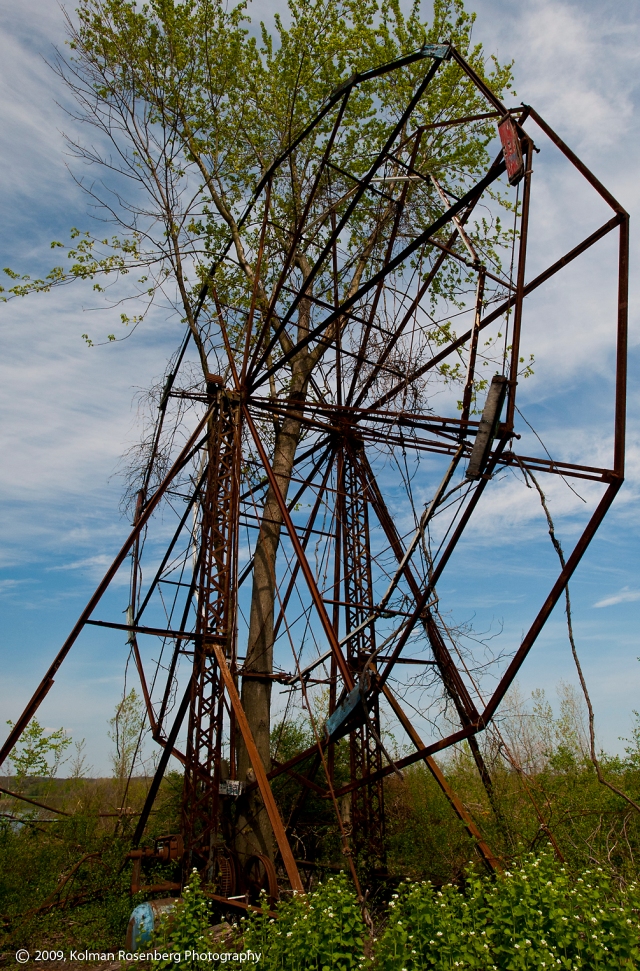 A tree grows thru the remains of the ferris wheel.

The scene in 2009 was rather surreal with a mature tree growing right thru the middle of the old rusty ferris wheel.  All throughout the remains of the park were rusting remnants of rides and their tracks, falling wooden buildings, and fleeting memories for those who had enjoyed childhood moments here. 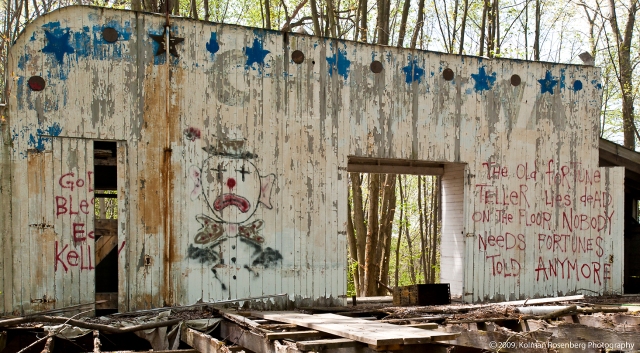 The wall that says it all.

I came across this one remaining wall of one of the buildings and between the graffiti painted sad clown face and the comment painted on the wall to the right (The old fortune teller lies dead on the floor.  Nobody needs fortunes told anymore.), I thought it pretty well summed up the demise of this once vibrant park!

Ironically, I think many of us would like to have our fortunes told these days!

My interest in photography began as a college newspaper and yearbook photographer during the stormy 1960s and 1970s. I was influenced by many of the great photojournalists and documentary photographers such as W. Eugene Smith, Walker Evans, Dorothea Lange, Gordon Parks, Margaret Bourke-White and other black and white photographers of Life Magazine and the earlier Farm Security Administration. Though many of these photographers documented the horrors of war and the plight of poverty, they also showed me the dignity and adaptability of human beings in their desire to prevail.
View all posts by Kolman Rosenberg →
This entry was posted in Uncategorized and tagged amusement, Childhood, Chippewa, Chippewa Lake Park, Clown, Decay, Ferris Wheel, Medina County, OH, ohio, park, Rides, Roller Coaster, track. Bookmark the permalink.