Posted on December 25, 2012 by Kolman Rosenberg 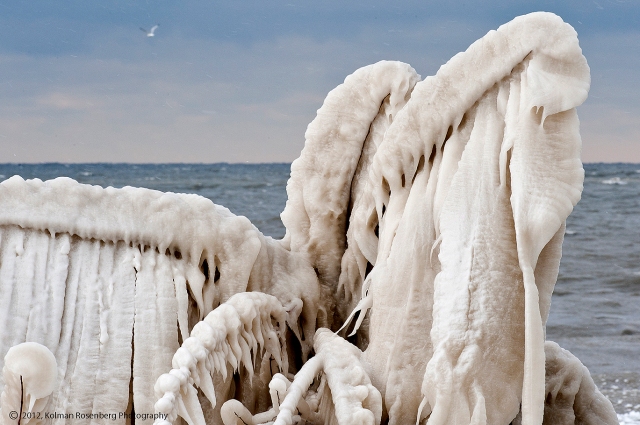 Although it did snow last night and last Friday, we have not had the kind of snow, nor the kind of winter that we have had in the past!  Two years ago, in December, we had the famous frozen Cleveland West Breakwall lighthouse.

I captured the frozen ice formation above during that same few days when the lighthouse was encased in ice.  We haven’t had anything remotely similar since!  I’m beginning to wonder when a real winter will return?

I can’t say I’m really missing it but if it’s going to be cold and gray, then it might as well be picturesque with fluffy white snow and abstract ice formations.  This second image, shot at Edgewater Park like the first one, was shot looking westward from the parking lot.  The windblown icicles on the pier in the background shows the further effects of the wind which encased the lighthouse in ice and produced these ice formations along the shoreline. 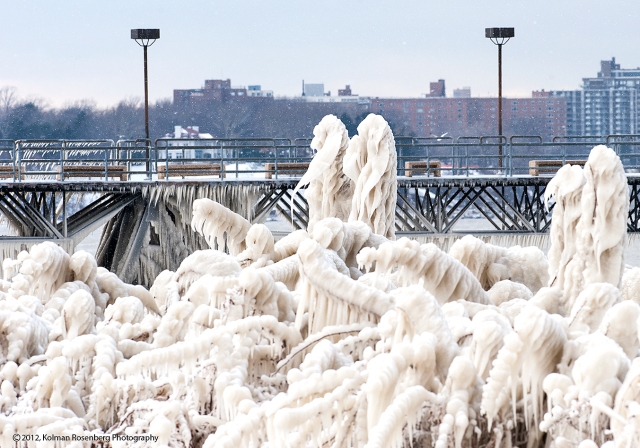 Let me take this opportunity to wish everyone a wonderful holiday season as we approach 2013!

My interest in photography began as a college newspaper and yearbook photographer during the stormy 1960s and 1970s. I was influenced by many of the great photojournalists and documentary photographers such as W. Eugene Smith, Walker Evans, Dorothea Lange, Gordon Parks, Margaret Bourke-White and other black and white photographers of Life Magazine and the earlier Farm Security Administration. Though many of these photographers documented the horrors of war and the plight of poverty, they also showed me the dignity and adaptability of human beings in their desire to prevail.
View all posts by Kolman Rosenberg →
This entry was posted in Uncategorized and tagged Cleveland, edgewater park, formations, ice, Lake Erie, Northcoast, OH, ohio, shoreline, winter. Bookmark the permalink.

7 Responses to Where’s the Real Winter?