In 2009 I was able to visit the Western Reserve Historical Society’s (WRHS) restoration facility in Macedonia, OH.  This is where the historical society stored and restored it’s collection of old automobiles, airplanes, merry-go-round horses and all sorts of other items for it’s museums.  Leaning up agains a wall was the old two wheeled bicycle, the type with the big wheel in front and the small wheel in the back.  It was up against a blank wall and in poor lighting so I shot this silhouette.  Space prevented me from capturing the entire bike so I concentrated on details and smaller sections and shapes.

Yesterday, I went to the Society’s Crawford Auto Aviation Museum.  The museum has been remodeled and is not quite finished but much nicer than it had been.  While roaming the lower level where most of the old automobiles had been, I came across the old bike again!  It had finally made it to the museum itself. 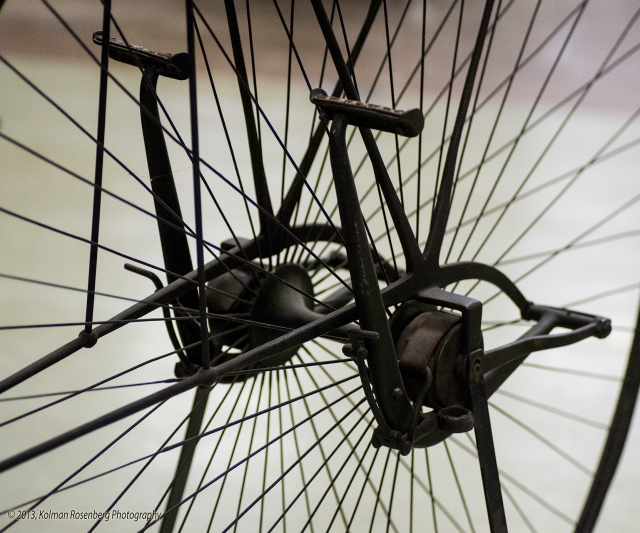 It was like being reunited with an old friend and seeing that friend make it to the big show, almost!  It still has a ways to go to be as prominent as some of the automobiles on the upper level, well lit and sitting in prime time space, but maybe the next time I stop in it will be displayed in better light and positioning.

My interest in photography began as a college newspaper and yearbook photographer during the stormy 1960s and 1970s. I was influenced by many of the great photojournalists and documentary photographers such as W. Eugene Smith, Walker Evans, Dorothea Lange, Gordon Parks, Margaret Bourke-White and other black and white photographers of Life Magazine and the earlier Farm Security Administration. Though many of these photographers documented the horrors of war and the plight of poverty, they also showed me the dignity and adaptability of human beings in their desire to prevail.
View all posts by Kolman Rosenberg →
This entry was posted in Uncategorized and tagged auto, automobile, bicycle, bike, crawford, crawford auto aviation museum, historical, history, macedonia, Museum, OH, ohio, restoration, silhouette, western reserve, western reserve historical society, wheel. Bookmark the permalink.

4 Responses to The Old Bike