Looking thru some old, 2004 photos, I came upon some shots that go nicely with some shots I took last month.  This first photo is of a restored gas station at an Antique Engine club in Ashtabula County, OH.  I gave the photo a vintage look and then used the same effect on a photo taken last month at the Crawford Auto Aviation Museum, a part of the Western Reserve Historical Society. 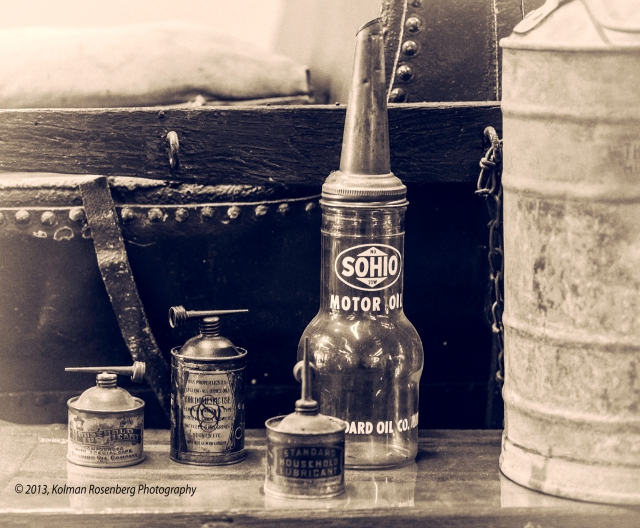 I’ve had quite a few comments recently pertaining to the nostalgia that some of these images provide.  Hope these do the same!

My interest in photography began as a college newspaper and yearbook photographer during the stormy 1960s and 1970s. I was influenced by many of the great photojournalists and documentary photographers such as W. Eugene Smith, Walker Evans, Dorothea Lange, Gordon Parks, Margaret Bourke-White and other black and white photographers of Life Magazine and the earlier Farm Security Administration. Though many of these photographers documented the horrors of war and the plight of poverty, they also showed me the dignity and adaptability of human beings in their desire to prevail.
View all posts by Kolman Rosenberg →
This entry was posted in Uncategorized and tagged antique, ashtabula, Ashtabula County, auto, automobile, autos, BP, cars, county, crawford auto aviation museum, gas, Gasoline, memories, Nostalgia, Oil, old, old days, Sohio, standard oil, station, western reserve historical society. Bookmark the permalink.