Posted on September 8, 2013 by Kolman Rosenberg

Last weekend a “barnstorming” photo shoot with a photographer friend resulted in many photos of decaying rural barns and buildings in Southern Ashtabula County Ohio. 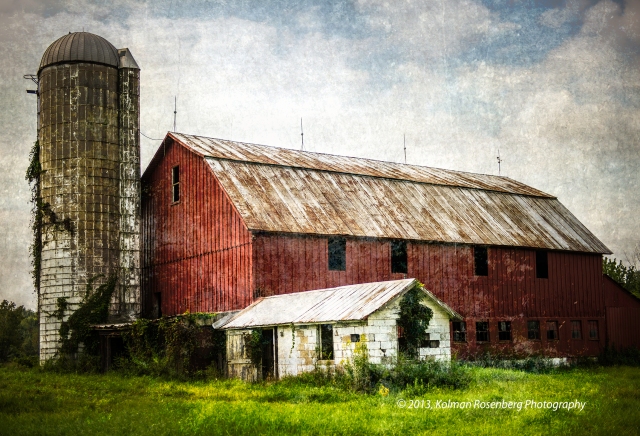 This large red barn and silo, sitting behind an abandoned home on U.S. Rt 6 in Rome, OH was in better shape than many.  It’s windows were all broken but it’s roof was intact, unlike most we had come across.  We saw several collapsed or partially collapsed barns and silos, whose owners came out and spoke with us and told us or their impending demolition.  This particular property was soon to be sold at auction. 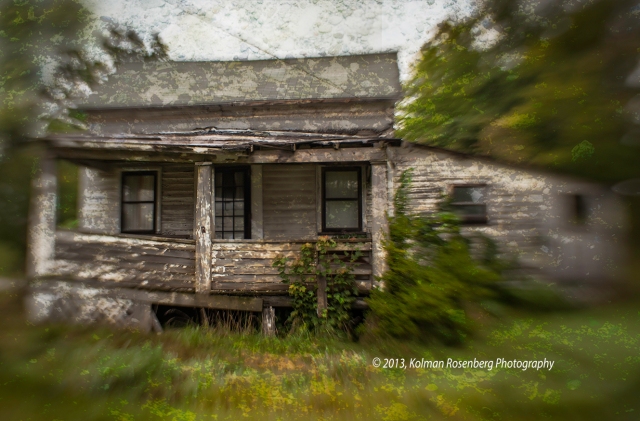 Near the intersection of Rts. 322 and 534 in Orwell, OH we discovered this crumbling little home.  The roof was sagging and climbing vegitation were taking over the front porch.  It appeared that at one time this home sat in an active area of town, overlooking a little park.  Today many of the building just south of it were in similar condition.  This area made me very curious.  What once was vibrant was now quickly decaying!  One building which appeared to have been a hotel, was quite damaged and even had a satellite dish attached, indicating that it had been active not too long ago.

Much has been written and photographed about urban decay in the big cities, but decay seems to obey no borders.  Fortunately there is new development too in some of these areas!  Perhaps it’s just the cycle of life?

My interest in photography began as a college newspaper and yearbook photographer during the stormy 1960s and 1970s. I was influenced by many of the great photojournalists and documentary photographers such as W. Eugene Smith, Walker Evans, Dorothea Lange, Gordon Parks, Margaret Bourke-White and other black and white photographers of Life Magazine and the earlier Farm Security Administration. Though many of these photographers documented the horrors of war and the plight of poverty, they also showed me the dignity and adaptability of human beings in their desire to prevail.
View all posts by Kolman Rosenberg →
This entry was posted in Uncategorized and tagged ashtabula, barn, county, Decay, house, OH, ohio, porch, rural, shack, silo. Bookmark the permalink.