Posted on November 3, 2013 by Kolman Rosenberg

When people outside of the area think of Youngstown, OH, and Northeast Ohio in general, they think of it as an old rust-belt area, which it was.  The area however has done much to experience a resurgence.

Traveling to Youngstown a few times this summer and fall with some photo buddies to photograph the picturesque Lanterman’s Mill, we found a city slowly rebounding and one of the most beautiful parks systems around, the Mill Creek Metroparks. 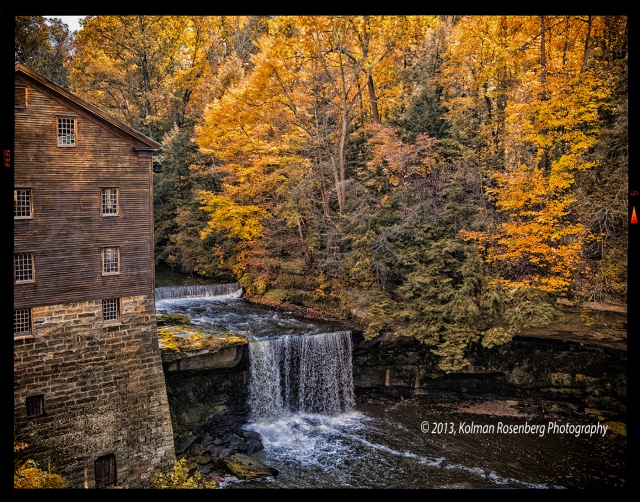 Lanterman’s Mill, featured in another post, is now surrounded by greens, and golds!

Another beautiful feature of this park, only a mile from Lanterman’s Mill is a suspension bridge looking like it came out of a fairytale. 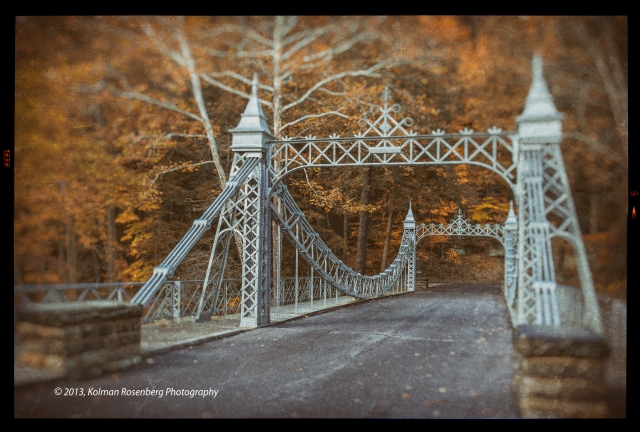 This bridge was originally built in 1895 and crosses Mill Creek within the park.  One of a kind!  Who knew these beautiful scenes could be found in the rust-belt city of Youngstown?

My interest in photography began as a college newspaper and yearbook photographer during the stormy 1960s and 1970s. I was influenced by many of the great photojournalists and documentary photographers such as W. Eugene Smith, Walker Evans, Dorothea Lange, Gordon Parks, Margaret Bourke-White and other black and white photographers of Life Magazine and the earlier Farm Security Administration. Though many of these photographers documented the horrors of war and the plight of poverty, they also showed me the dignity and adaptability of human beings in their desire to prevail.
View all posts by Kolman Rosenberg →
This entry was posted in Uncategorized and tagged Autumn, colors, creek, Fall, grist, lanterman's mill, mill, mill creek, OH, ohio, rust-belt, youngstown. Bookmark the permalink.

10 Responses to Who Knew?