Posted on December 11, 2012 by Kolman Rosenberg 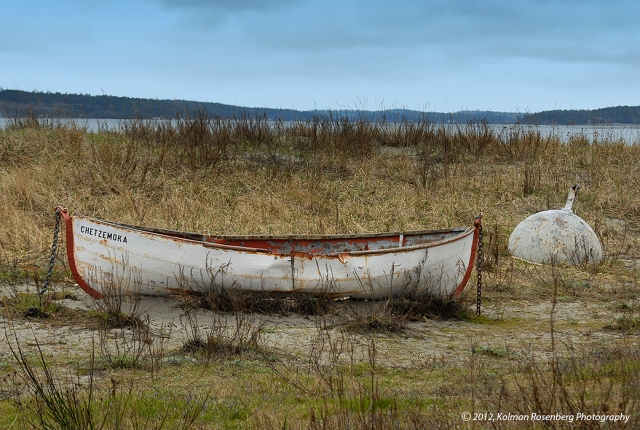 I’ve had a hard time finding the time to update the blog lately!  With my part-time job expanding hours for the holiday season, normal holiday activities and trying to systematically transition from a Windows  computer to a Mac computer, I hardly know whether I am coming or going!

This photo, of an abandoned boat with mooring chains and a mooring ball was shot in or near Fort Worden in Port Townsend, Washington.  The photo always suggests an untold story to me.  It may have been a lifeboat at one time and the name on it appears to maybe be Russian.  How did it come to be land-bound in the sand approximately 50 yards from the water’s edge?  I’d like to know the story!

Fort Worden is today a conference center.  The fort itself was built in the late 1800s to guard the entrance to Puget Sound.  If you saw pictures of the fort, you might find it familiar looking.  It was the sight of the filming of one of my favorite films, “An Officer and a Gentleman”.  Richard Gere’s character, Zack Mayo, well may have run by this sight during scenes of his physical conditioning in the movie.

My interest in photography began as a college newspaper and yearbook photographer during the stormy 1960s and 1970s. I was influenced by many of the great photojournalists and documentary photographers such as W. Eugene Smith, Walker Evans, Dorothea Lange, Gordon Parks, Margaret Bourke-White and other black and white photographers of Life Magazine and the earlier Farm Security Administration. Though many of these photographers documented the horrors of war and the plight of poverty, they also showed me the dignity and adaptability of human beings in their desire to prevail.
View all posts by Kolman Rosenberg →
This entry was posted in Uncategorized and tagged abandoned, ball, beach, boat, bouy, Fort Worden, lifeboat, mooring, Officer and a Gentleman, physical conditioning, port townsend, Puget Sound, Richard Gere, WA, washington, Zack Mayo. Bookmark the permalink.