Posted on August 5, 2013 by Kolman Rosenberg 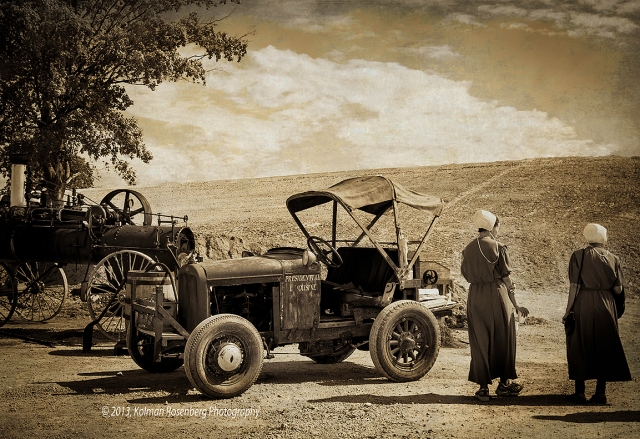 Reminiscent of the dustbowl

I took a trip to Holmes County last Friday with fellow photographers and visited the Mt. Hope Auction which was holding an Antique Engine show.  It was like stepping back in time as the many tractors belched deep dark smoke from their coal fired engines and powered everything from sawmills to dynamometers.  The first photo above reminded me of the old photos from the Farm Security Administration of the Dust Bowl days and I did quite a bit of post processing to give it that kind of look.  The Amish ladies and the old Chevy and steam tractor to the left look like a photo from yesteryear.

The Amish boy, walking up a stone pathway also seemed to take me back in time.  The event itself also included contests of skill including hay bale throwing, wrench throwing and skillet throwing!  It was a fun day and I’ll surely go back another time!

My interest in photography began as a college newspaper and yearbook photographer during the stormy 1960s and 1970s. I was influenced by many of the great photojournalists and documentary photographers such as W. Eugene Smith, Walker Evans, Dorothea Lange, Gordon Parks, Margaret Bourke-White and other black and white photographers of Life Magazine and the earlier Farm Security Administration. Though many of these photographers documented the horrors of war and the plight of poverty, they also showed me the dignity and adaptability of human beings in their desire to prevail.
View all posts by Kolman Rosenberg →
This entry was posted in Uncategorized and tagged amish, chevy, dustbowl, Engine, holmes county, OH, ohio, sawmill, Steam, Tractor. Bookmark the permalink.