Waiting for the Roller Coaster 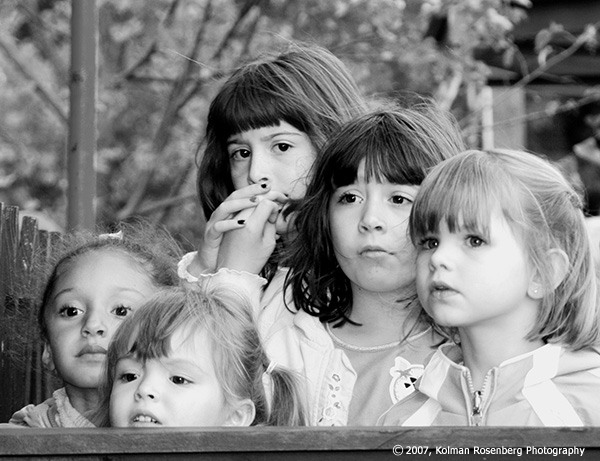 Waiting for the roller coaster at Conneaut Lake Park.

A few years ago, on a visit to Conneaut Lake Park with my granddaughter and her cousin, I saw this scene of a group of young girls waiting in line to ride the roller coaster.  This is a small park and this was not a very large roller coaster, but the look on their faces said it all.  They were watching the coaster with expressions of anxiety on their young faces.  With just a title, this photograph tells an amusing story!

My interest in photography began as a college newspaper and yearbook photographer during the stormy 1960s and 1970s. I was influenced by many of the great photojournalists and documentary photographers such as W. Eugene Smith, Walker Evans, Dorothea Lange, Gordon Parks, Margaret Bourke-White and other black and white photographers of Life Magazine and the earlier Farm Security Administration. Though many of these photographers documented the horrors of war and the plight of poverty, they also showed me the dignity and adaptability of human beings in their desire to prevail.
View all posts by Kolman Rosenberg →
This entry was posted in Uncategorized and tagged amusement, anxiety, coaster, Conneaut, expression, girls, lake, park, roller, young. Bookmark the permalink.

2 Responses to Waiting for the Roller Coaster