Posted on February 17, 2013 by Kolman Rosenberg 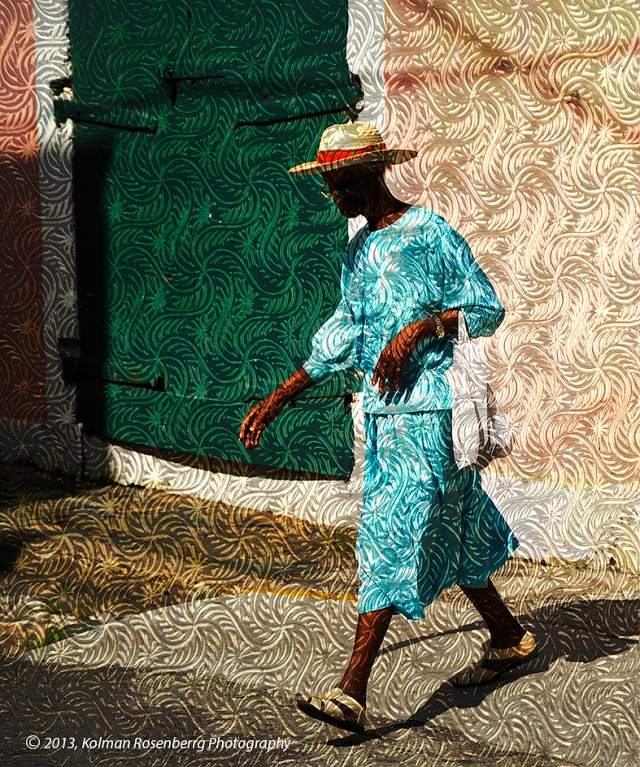 A composite from 2 markets

Cleveland’s West Side Market is scheduled to re-open tomorrow with the completion of the cleanup after a fire did some damage a few weeks ago.  I visited the market last winter and one photo that I took was of a glass window in a door with an interesting swirling pattern in the glass.  For this photo, I overlaid that pattern over an image of a woman walking from the market in Charlotte Amalie, the capital city on the U.S. Virgin Island of St. Thomas.  I knew when I shot the window that I would use that pattern in combination with some other photo or photos.  It was just a matter of time!  Playing with photos today, I decided to give it a try, combining photos involving 2 different markets that are worlds apart!

My interest in photography began as a college newspaper and yearbook photographer during the stormy 1960s and 1970s. I was influenced by many of the great photojournalists and documentary photographers such as W. Eugene Smith, Walker Evans, Dorothea Lange, Gordon Parks, Margaret Bourke-White and other black and white photographers of Life Magazine and the earlier Farm Security Administration. Though many of these photographers documented the horrors of war and the plight of poverty, they also showed me the dignity and adaptability of human beings in their desire to prevail.
View all posts by Kolman Rosenberg →
This entry was posted in Uncategorized and tagged Charlotte Amalie, Cleveland, composite, glass, OH, ohio, swirling, USVI, Virgin Islands, west side market, Westside Market. Bookmark the permalink.